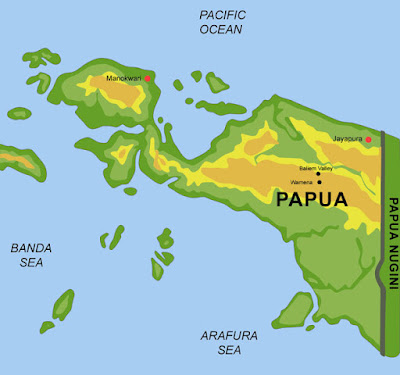 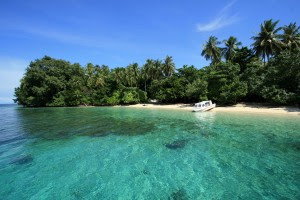 Cendrawasih Bay National Park was established in 1993 by the Ministry of Forestry . In addition to enjoying the underwater nature , you can also explore the islands . Mioswaar Island , one of the islands in Papua tourist attractions , has a cave with a hot spring with a sulfur content that is worthy of your visit . In addition Mioswaar Island , there is still Yoop Island , numfor , Nusrowi Island and other islands that you should not miss .

These attractions are in the two administrative districts of Wondama and Nabire. The national park is also a research center or a whale shark whale sharks undertaken by the government in collaboration with a broad with lake 9,360 hectares is the largest lake in Papua. Located about 50 km from downtown Jayapura, Sentani Lake offers incredible beauty. There are at least 21 islands that adorn the lake with a height of 75 meters above sea level this.There many activities you can do here ranging from swimming, fishing, culinary eating around the lake to rent a boat to get around the lake. In addition, there are 24 villages around these places can be visited and interact directly with citizens. A view of a row of houses on stilts with a fishing net into a natural thing you see here. What is interesting is the annual event is the Lake Sentani Festival is usually held in mid-June. At the festival, where it will travel in full of Papua tourists who want to see a variety of performing arts and local culture. In addition to enjoying the performances during the festival, you can also satisfy the tongue and stomach with typical cuisine served in Papua are many here. Domestic and foreign NGOs 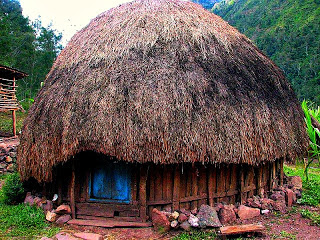 Honai house consists of three types , namely the home for men ( called Honai ) , home to the women ( called Ebei ) , and a home for their cattle , swine ( called Wamai ) . There are also several Papuans who are no longer living in the home of indigenous Papuans like grip that there used to be , and stay the same among members of the nuclear family , but cattle / pig always get its own house . For Papuans , livestock is a treasure . Although Honai is the original home of the Dani , we can see him in a few museums scattered in Indonesia because there are many people who are curious or want to know what kind of Papua Dani tribe 's home . Honai customs houses and other tribes is a testament to the cultural wealth of our nation that we should know. If you want to know more about Papua custom home , you can look on the internet to search for custom home Papua wikipedia . 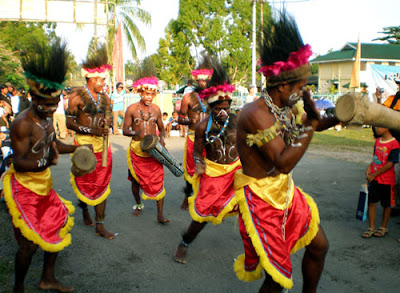 According to some sources Musyoh dance is a form of sacred dance rituals in an effort to drive out the spirits of the dead because of an accident . This dance is generally in the tug when there is someone of Papuan tribal people who died because of accidents and it is believed that his spirit was not quiet . Up with this dance implemented it will make the person can calm spirits . 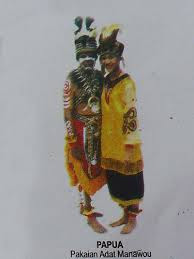 Manawou
Traditional clothes of men and women in Papua are similar. They were wearing body armor and cover the bottom with the same model . They also both wearing a headdress in the form of birds of paradise , bracelets , necklaces , and belts of beads , and tassels at the ankles . Shape clothes depicted here is a new creation . With spears / arrows and shields held bridegroom add to the impression of indigenous Papuans .

Same with West Papua, Province of Papua had Belati Knife as their traditional weapon.

One of the traditional weapons in Papua is the Dagger Knife . This weapon is made of leg bones and cassowary feathers adorn the upstream dagger . The main weapon other indigenous people are bow and arrows . The arc of bamboo or wood , while the bow rope made of rattan . Arrows made of bamboo , wood or bone kangaroo . Bows and arrows used for hunting or war. 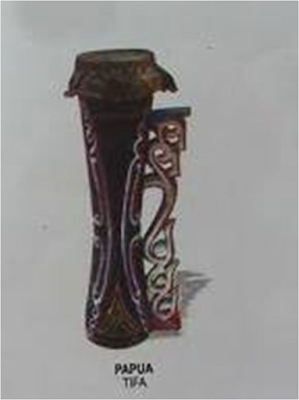 Tifa is a musical instrument that originated from Papua , Tifa looks like drums played way is to hit . Made from a piece of wood and its contents emptied or removed on one side of the tip is covered , and usually cover used deerskin dried to produce a good sound and usually made with carvings . each tribe in Maluku and Papua have his drums with their characteristic .Tifa usually played to accompany traditional dances ,like a war dance , a traditional dance asmat , and dance gatsi . rian is usually used on special occasions such as ceremonies or other important events .

okay, this is my last post guys, I hope all of my post is useful to you know more about Indonesian Culture.